« Foiling the paradigm » is a fierce, burning activity. Roland Barthes

According to the deliberately laconic description of the communiqué announcing it, Show show is « a splendid exhibition with neither sign nor counter  »(1). Which is to say that the peremptory assertion of a particularly noteworthy exhibition combines with a twofold negation whose nature seems to reinforce if not hallow its intrinsic qualities. In this instance, there is no need for advertising or media coverage. If the exhibition comes across as being thoroughly sufficient unto itself complying with an autotelic or self-focused logic, it does not economize when it comes to having a physical mooring in a venue dedicated to art. It can in fact be viewed at No. 7, Rue Saint-Claude, in Paris, around the clock, for ten days, from 16 to 25 November 2019.

Over and above the enigmatic alliteration, its title introduces a redundancy, a meaningful repetition, insomuch as it does not run aground in the vacuousness of a truism or the futility of a tautology. Show show is actually a show show (a model show) in the sense of a show flat. If the title thus plays with analogy, the artistic proposal nevertheless brings about a radical shift, not to say reversal. Beyond its historic and patrimonial use, a show flat is a service which is part and parcel of a commercial practice permitting the rational appropriation of a future space. And its effectiveness can be gauged by the quantity of desire that it bestirs, whose maximization largely relies on the neutrality of the arrangement. On the other hand, the show show presented by Show show proceeds in a quite different way, even if something of this neutrality remains. But there is neutral and Neutral, as Roland Barthes has masterfully taught us (2), and it is in this difference that the reversal is played out, based on an irreducible espousal of « the desire for Neutral ». As Barthes puts it,  « on the whole, desire is always for sale: all we do is sell, buy and exchange desires. The paradox of the desire for Neutral, its absolute singularity, is that it cannot be sold » (3).

Don't start thinking that what is involved here is a sleight of hand. The art market, to be sure, is always on the lookout, but this would be tantamount to overlooking the operational line of thinking of the Neutral which informs the entire project. For those who had a chance to see Show show, let us right away dispense with a misunderstanding: « the Neutral in question here irremediably exceeds the ordinary use made of it. So it is not surprising to sense the liveliness of the things on view, knowing that the Neutral does not refer to "impressions" of  greyness, "neutrality" and indifference, but much more to "intense, powerful and novel states" » (4). This is the case with the two ocelli on the floor and the two mirrors on the wall, which form Show show's visible grammar and the beginnings of a dialogue embarked upon by Vincent Beaurin with the American artist Monica Kim Garza.

This thinking about the Neutral works here by way of a demanding "dialectic of the opposite". In words of one syllable, the whole difficulty and the challenge of the artistic proposal being made to us consists in making a display without attracting attention. It is on this condition that it is possible to "foil the paradigm" (5) introduced by the art world, whereby the format of a show dictates nothing less than an economy of attention. As such, Show show belongs squarely in the tradition of art experiments undertaken in the latter half of the 20th century. which sought to "produce intensities by subtraction" (6). But the unusualness of this proposal lies in the effects brought on by the dialectic of the opposite: by sidestepping antagonism but without doing away with it, it manages to preserve its vitality to the detriment of its arrogance, in such a way as to suspend the opposition between the visible and the invisible, and the public and the private, thus revealing the undecidable nature of the "distribution of the sensible".

Show show thus illustrates the "amoral wavering" (7) which undermines two arrangements peculiar to this "system of perceptible obviousness" (8), which, in normal times, provides the distribution of parts and places within a common ground: the aesthetic arrangement of semblance (real/false semblance) and the political arrangement of display (exhibition/installation).
By making the exhibition space impenetrable and restricting the viewpoint over what is on view, Show show imposes a restricted visibility on the visitor, and thus creates the conditions for a reasonable doubt about what there is to see, or not. This doubt, incidentally, is bolstered by a link available in situ, which refers to the website dedicated to the exhibition, thanks to which Vincent Beaurin mischievously applies a principle of emulation between real space and virtual space, with this latter presenting pieces which might not be found in the physical space of the gallery, or else which find themselves in it, but without being accessible to the eye. In a contained to-and-fro, the visitor is thus handed over to an aesthetic arrangement with a precarious balance between true and false semblance, which helps to create a crisis in his beliefs and his perceptive expectations, while at the same time consecrating the still already hallucinatory character of seeing. For the artist, this kind of playground duplicity also gives him a chance to distil, at his leisure, "new" elements, without having to force a fixed status upon them.

With a view to keeping a distinction - which is tending to fade these days - between making art and exhibiting art, Boris Groys has recently developed a stimulating line of thinking around the political arrangement of displaying art. To this end, he makes a differentiation between installation and exhibition: whereas an exhibition venue works like an « extension of the neutral urban public place », which makes art objects readily accessible to visitors? eyes, and thus represents the « symbolic property of the public », the installation, on the other hand, deals with the « symbolic privatization of the public exhibition space », and represents « the way of enlarging the sphere of the artist's sovereign rights; of extending the specific art object to the exhibition venue itself » (9). This differentiation results in the renewed possibility of clearly separating the artist from the curator, given that this latter?s activity is limited to dealing with the administration of the art exhibition, precisely where the artist, within a sovereign installation-based logic, overlaps the act of artistic production with the act of his or her exhibition. Needless to say, the casting can always be reversed. Boris Groys is well aware of this, because he derives from this possibility of reversal the societal challenge of the installation arrangement. In his eyes, this latter has « become the dreamed-of experimental terrain for revealing and exploring the ambiguity at the heart of the western idea of freedom ». And he adds: « This is why, over these past few decades, we have seen the emergence of innovative museum projects, which henceforth seem to give more credit to the authoritarian and sovereign actions of the curator. Just as we have witnessed the appearance of art practices claiming to be collaborative, democratic, decentralized, and authorless » (10).

If we relate these reflections to the present case, it seems clear that Show show stems from installation, so obvious is the artist's sovereign freedom. In the same way that « the opposite dialogues and denies » (11), this artistic proposal presents an exhibition and its contestation: in this sense, this exhibition is an installation. So its space is the symbolic private property of the artist.  He uses it like a place where self-withdrawal is possible and initiation to the other imaginable. But he is still the unique legislator, and any visitor wishing to cross the threshold must submit to his authority. So as this space is conceived as impossible to cross, the artist's authority is thereby paradoxically diminished, because the visitor cannot request entry and consequently does not have to submit . And this all the more so because the artist's identity is suspended within a relative anonymity, and because, furthermore, he conceives this space as an exterior. So the visitor?s freedom is also preserved: he is free to stop on the threshold or carry on his way. In both cases, however, if the experience he has had is superficial, the visitor can only relegate the installation to an exhibition, and assert its freedom as a simple solitary project. By trying, conversely, to enter this exterior, which is on the face of it impenetrable, he maintains the prerogatives of the installation, while at the same time challenging the artist's sovereignty on his own turf, at the risk either of an alienation, or of a revival of the sharing of the perceptible. So perhaps Show show is not hiding, but making a mark.

(1) See in particular the website dedicated to the exhibition: www.showshow.paris. 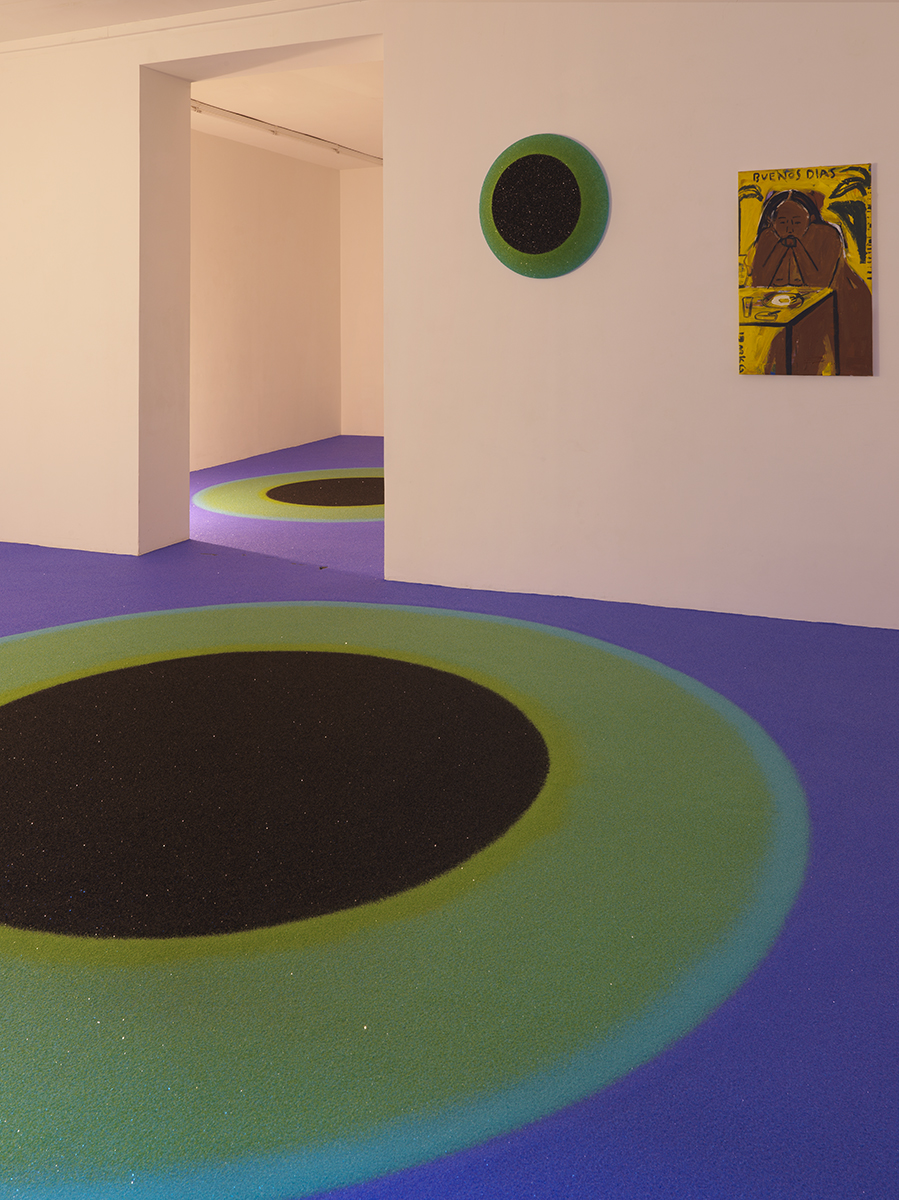 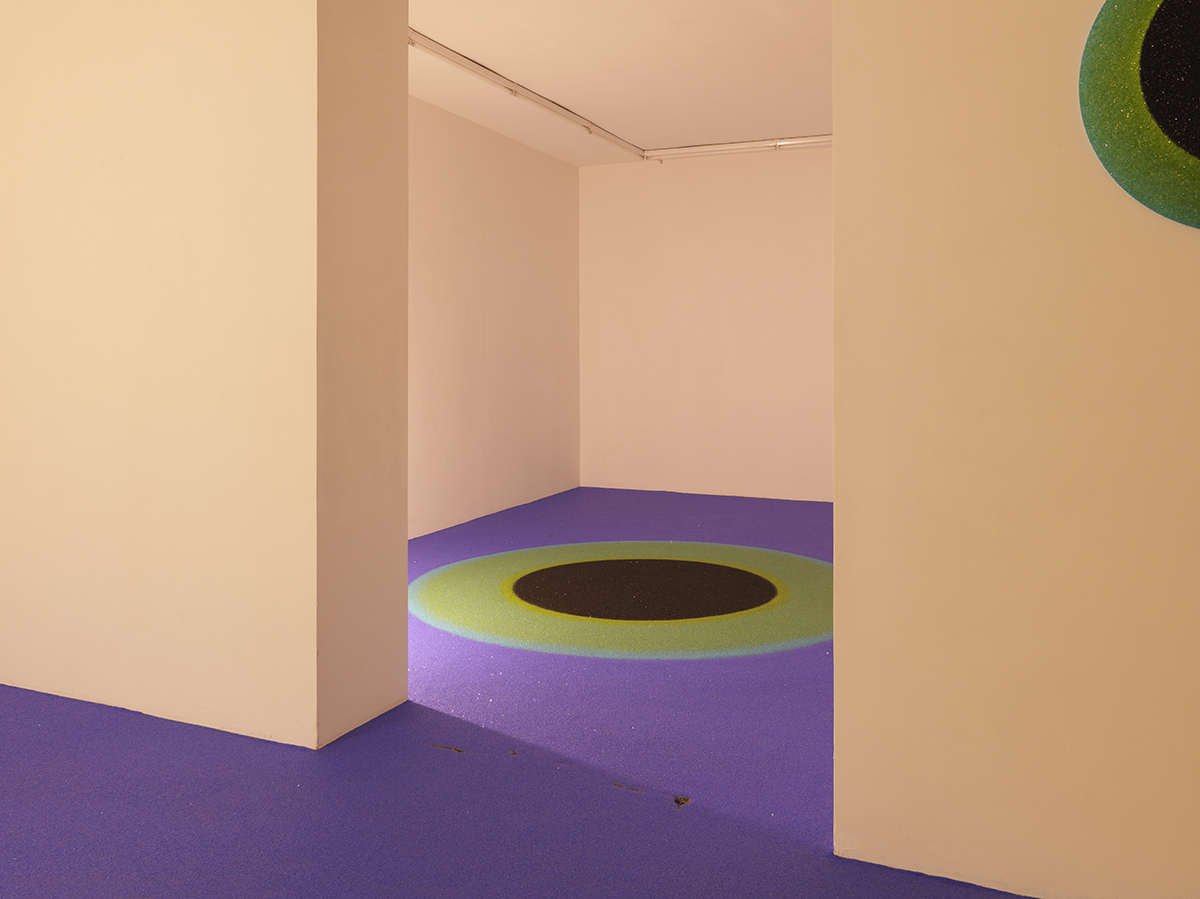 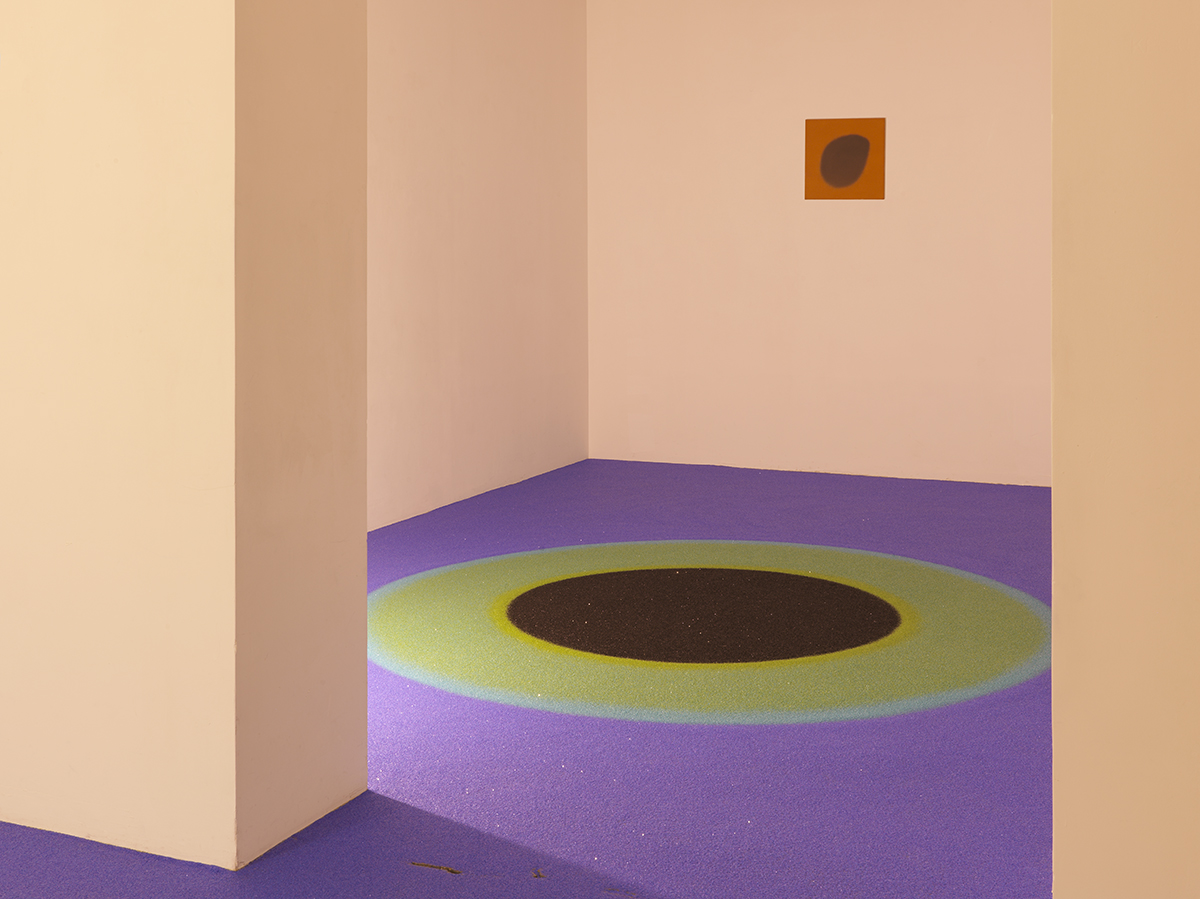 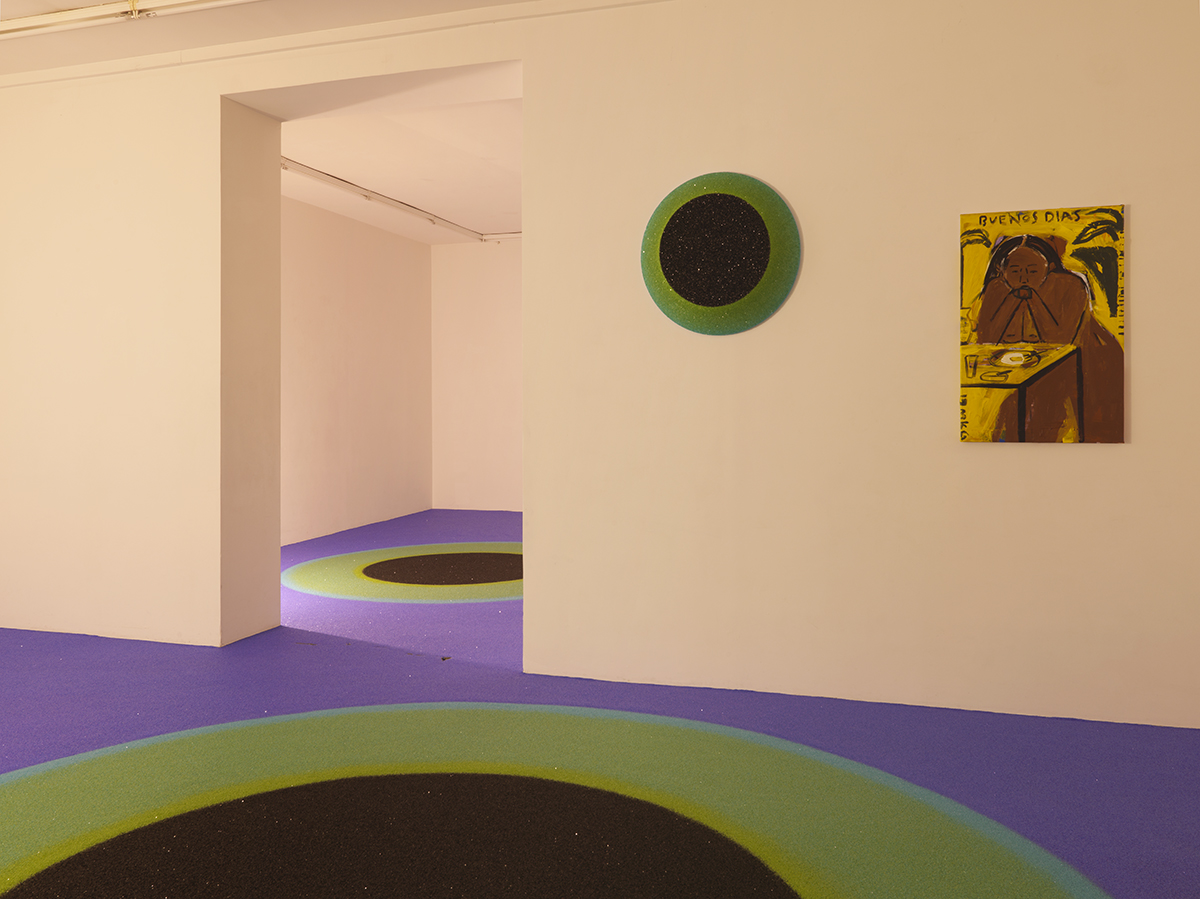 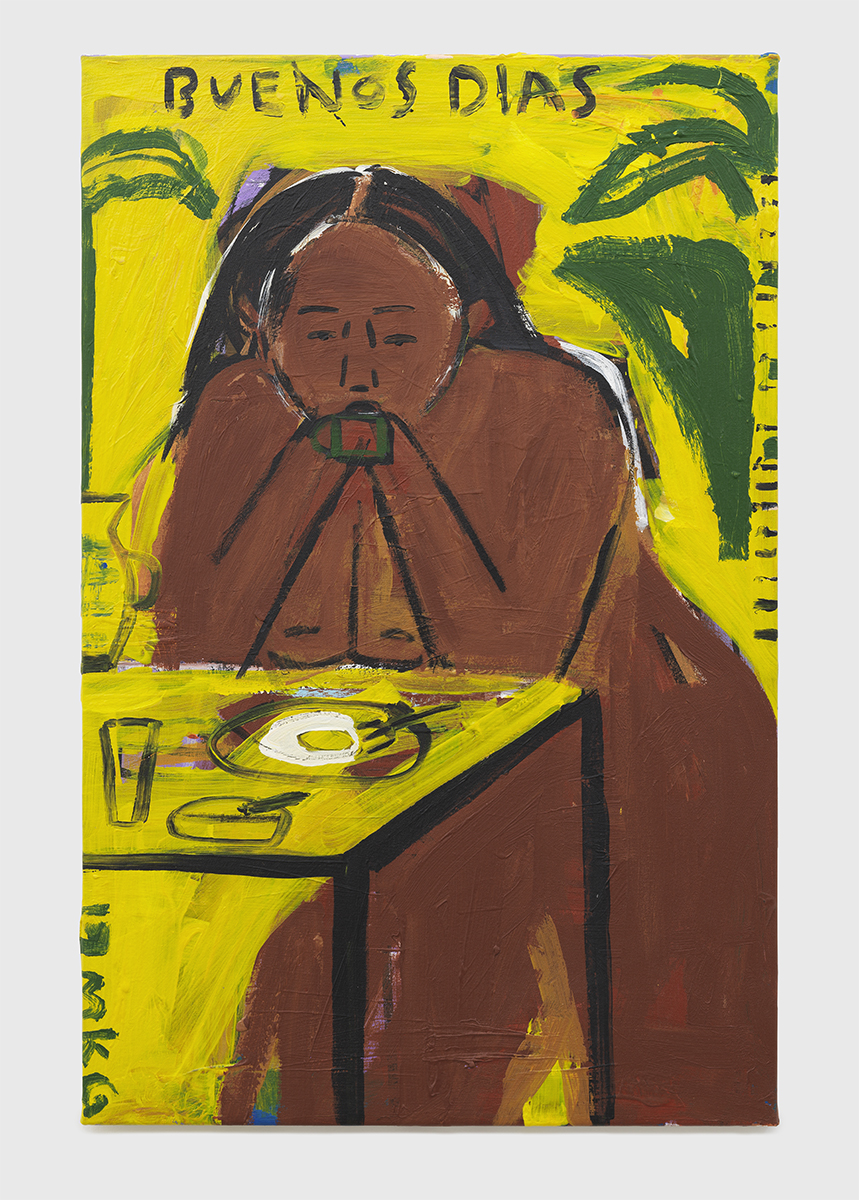 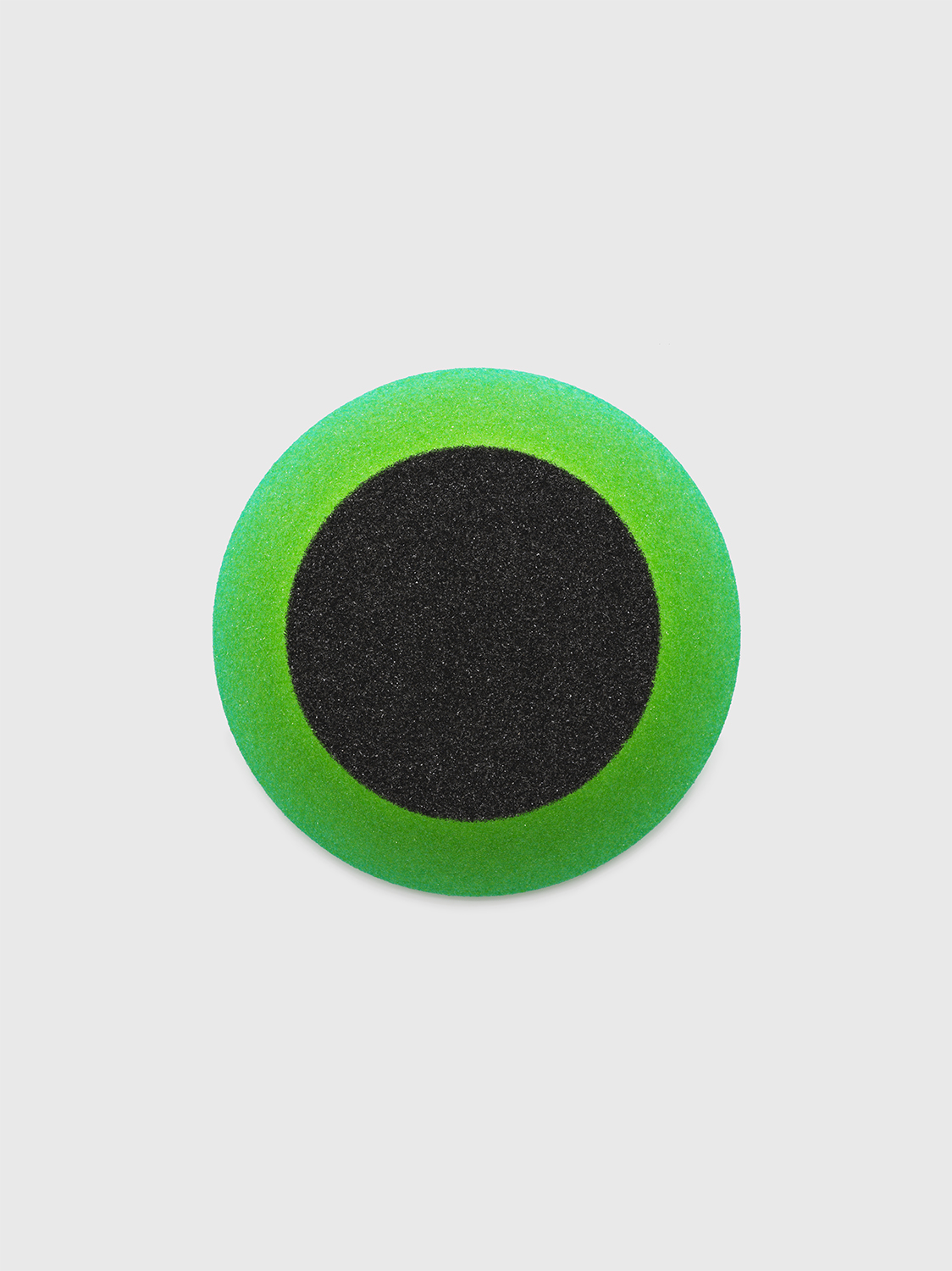 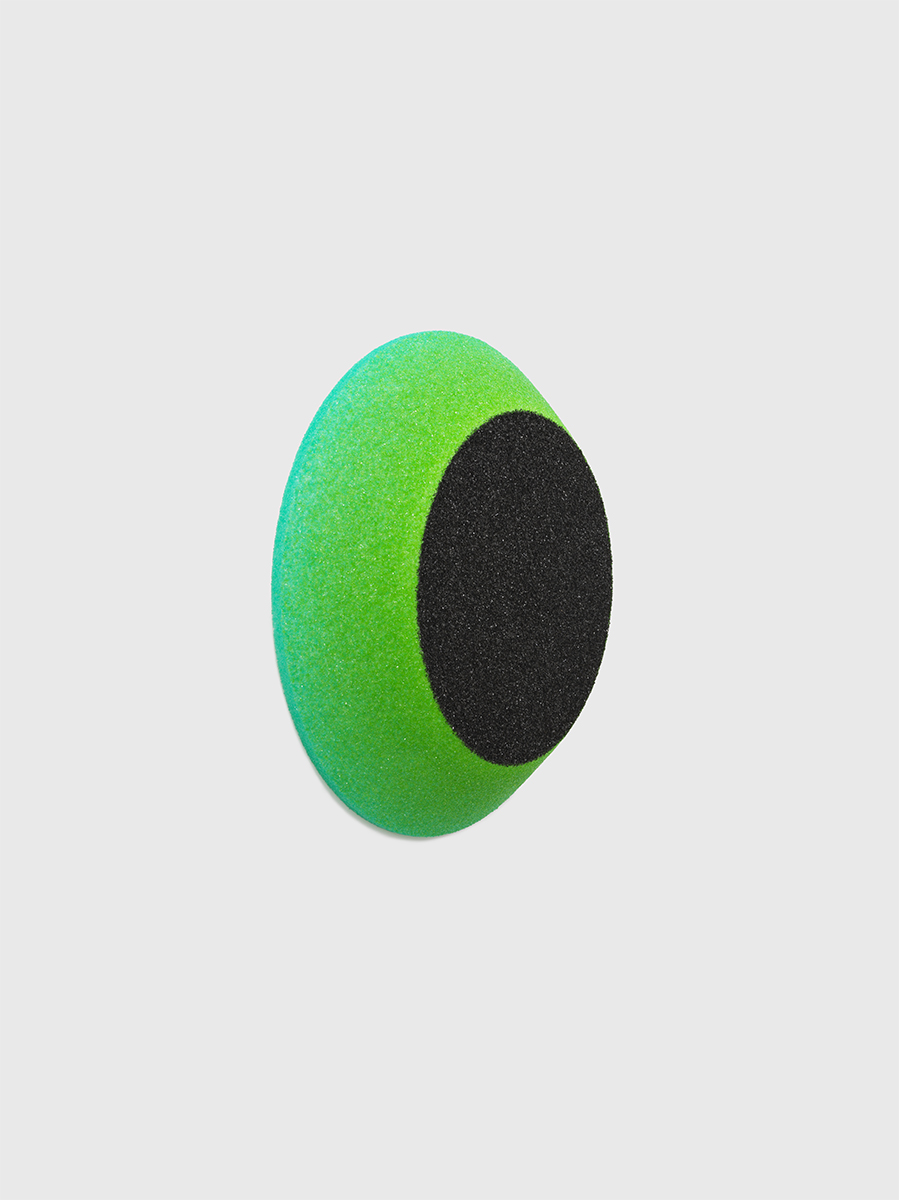 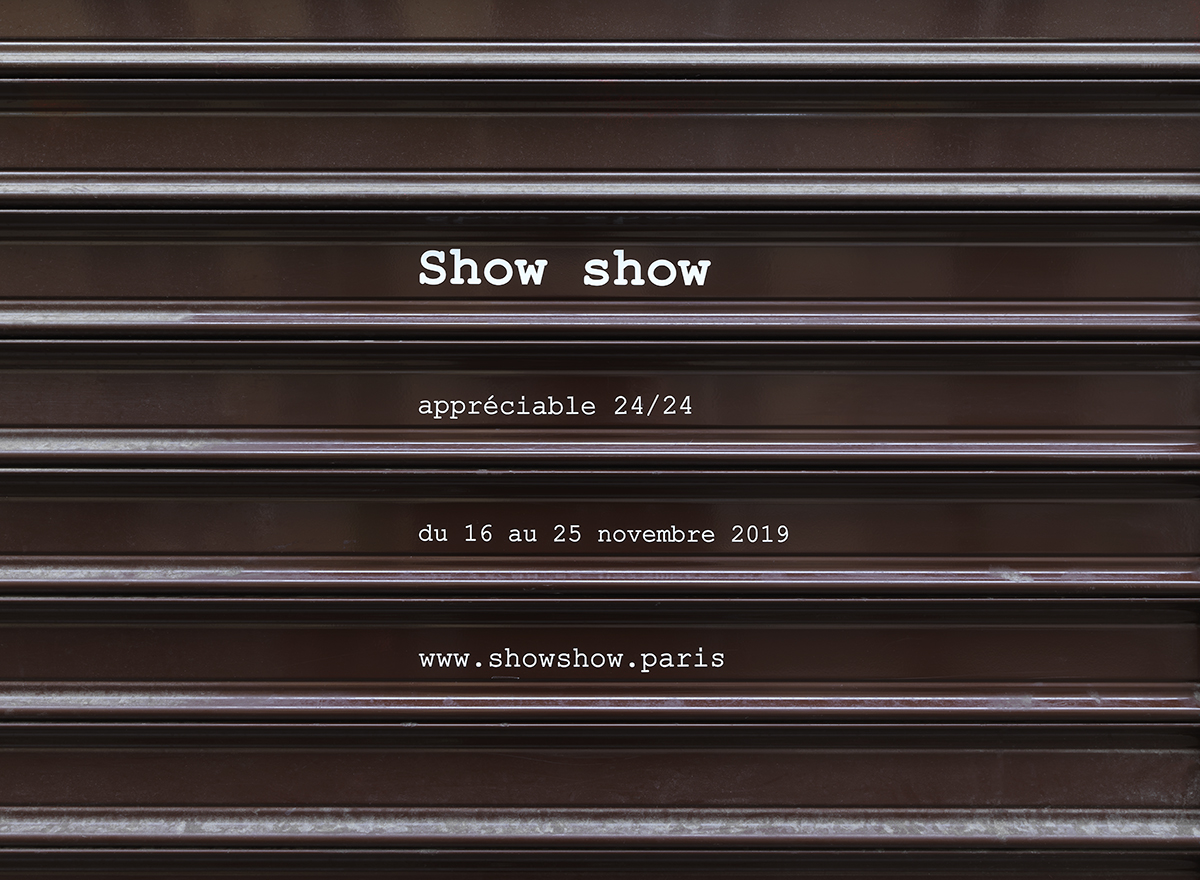