"My fantasy is the calm, an empty plain, embraced by the sun, refreshed by the rain, entities as distinct as the sky, the mountain, the river."

Does this new body of work by Vincent Beaurin represent a "horizon of painting" - in every sense of the expression? Placed according to the median axis of 360°, the exhibition's inaugural sculpture, whose metric and mechanical presence accompanies us throughout the exhibition, the four paintings of the main gallery space result from a patient and rigorous research conducted by the artist.
The work consists of the realization of unique chromatic nuances from coloured transparent glass beads that are then articulated together. It requires the type of patience, that is necessary to find a perfect form, neither obvious nor alien, and which our eye and body can at once gaze on and never really take in. The research allows to exploit in depth the qualities of a support (aluminium honeycomb panels), which has a say about the intensity of colours, the blur of the contours, the tactile quality of the works. These abstractions lead from the horizon in painting (abstract Rothko-style sunsets for example) to the horizon of painting, that "green flash" of the pictorial sun, to which the artist dedicates himself since the mid-90s. ,The titles of these four recent pieces (-60', -10', -15' and -2'), relate to the minutes preceding the sun's disappearance.
The sun, a star that rises and sets over all of Vincent Beaurin's practice: from the overwhelming one, at Cézanne's studio, where he exhibited in 2010, to the magnetic and artificial one, of his exhibition Avant la panique at the Crédac in 2006 ; from his Spots of 2009-2012 to the omnipresent yellow colour of his early 2000's works. Painting and sculpting according to the sun, rather than to the history of painting: this is the program of a designer who became visual artist, after his training in engraving and many years contributing to the effervescence of French design.

"I physically feel the world as being entirely made up of powders. When I open my eyes, I see a carpet of images that stack, merge and flatten. Sometimes, images suddenly shift and cause a fracture in that screen. I can then glimpse what lies behind. It's black, not the tint which an object can distinguish itself by, more like the black of a pit." Vincent Beaurin, 2007

Maybe there are, for an artist, two ways to pursue his or her work. Either by never stopping to experiment new ways, or by submitting his or her research to an always more precise and immanent tension.  Undoubtedly, Vincent Beaurin belongs to this second category. Since the 1990s, he never ceased to question colour(s), shape(s), pictorial tradition(s) and means by which plastic language unfolds in space. This new exhibition bears witness to it, stressing the deep rigor with which he moves forward, step by step, in his comprehension and his baring of optical and pictorial phenomenon. Here, seemingly turning his back on the Spots' three-dimensional virtuosity, he offers the fantasy of a radical research on limits.
Facing the coloured, nearly sleek surface, we view the painting shape. This canonical shape, which can also be a reminder of Artschwager's Blps, has been modified so that our gaze could pass supplely from the interior to the exterior, from the surface to the depth of field, the woven to the mineral, the painting to the sculpture; losing and finding itself in it. The very texture of the works plays with the ideas of frontiers and focus: their colour and appearance vary, depending on where we stand and where they're placed. Their succession in space elaborates a changing chromatic landscape, a sequence of infinite horizons. About these works, Vincent Beaurin wrote: "They draw in, like emptiness. They break of balance with the suddenness of an accident and absorb the noise through capillarity. They can frighten. They soothe." With precision, the artist's new series pursues its double ambition: producing a state of introspection and romantic but thoughtful openness to the world, uncertain but fertile. Under the double sign of the sun and the powdered horizon. 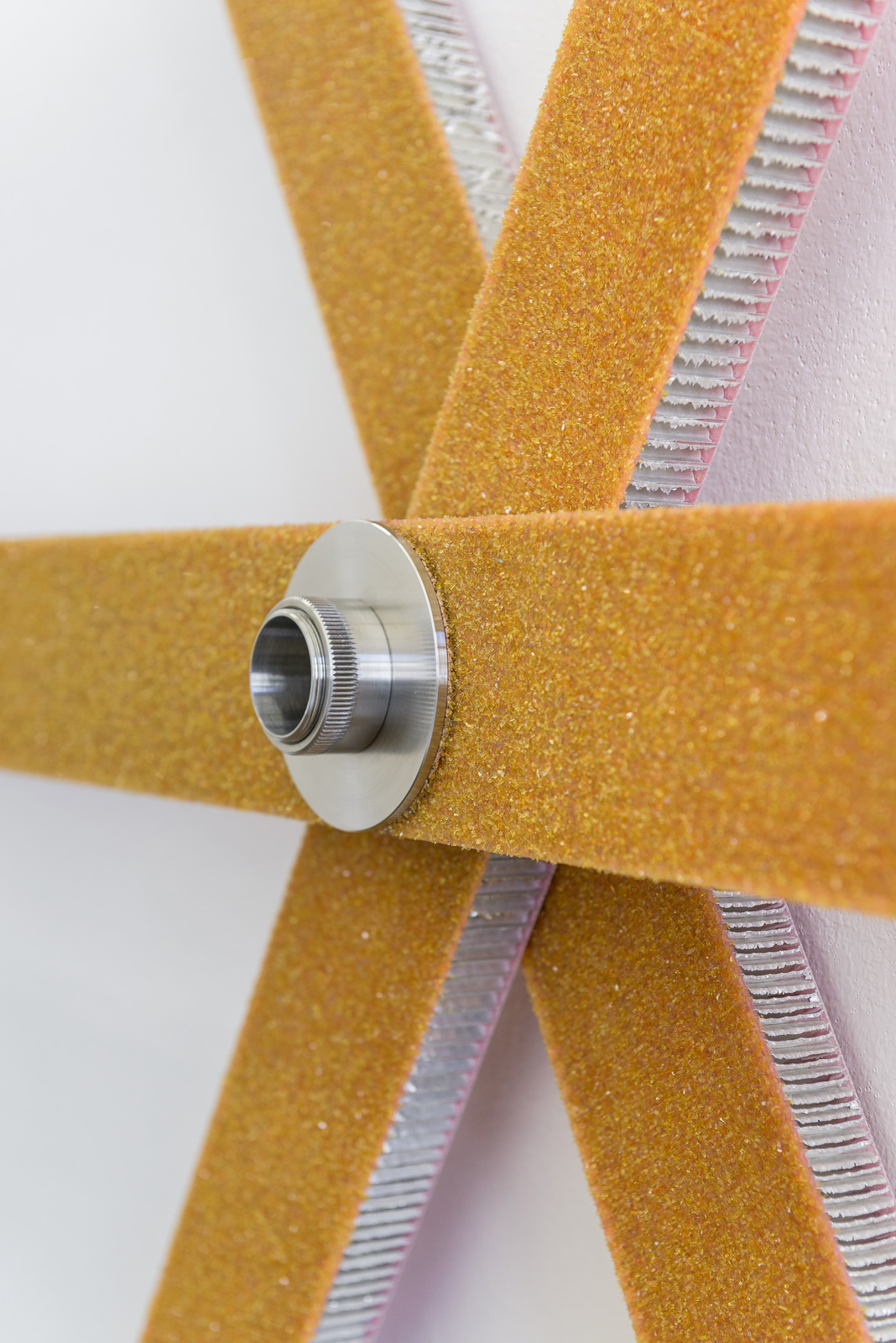 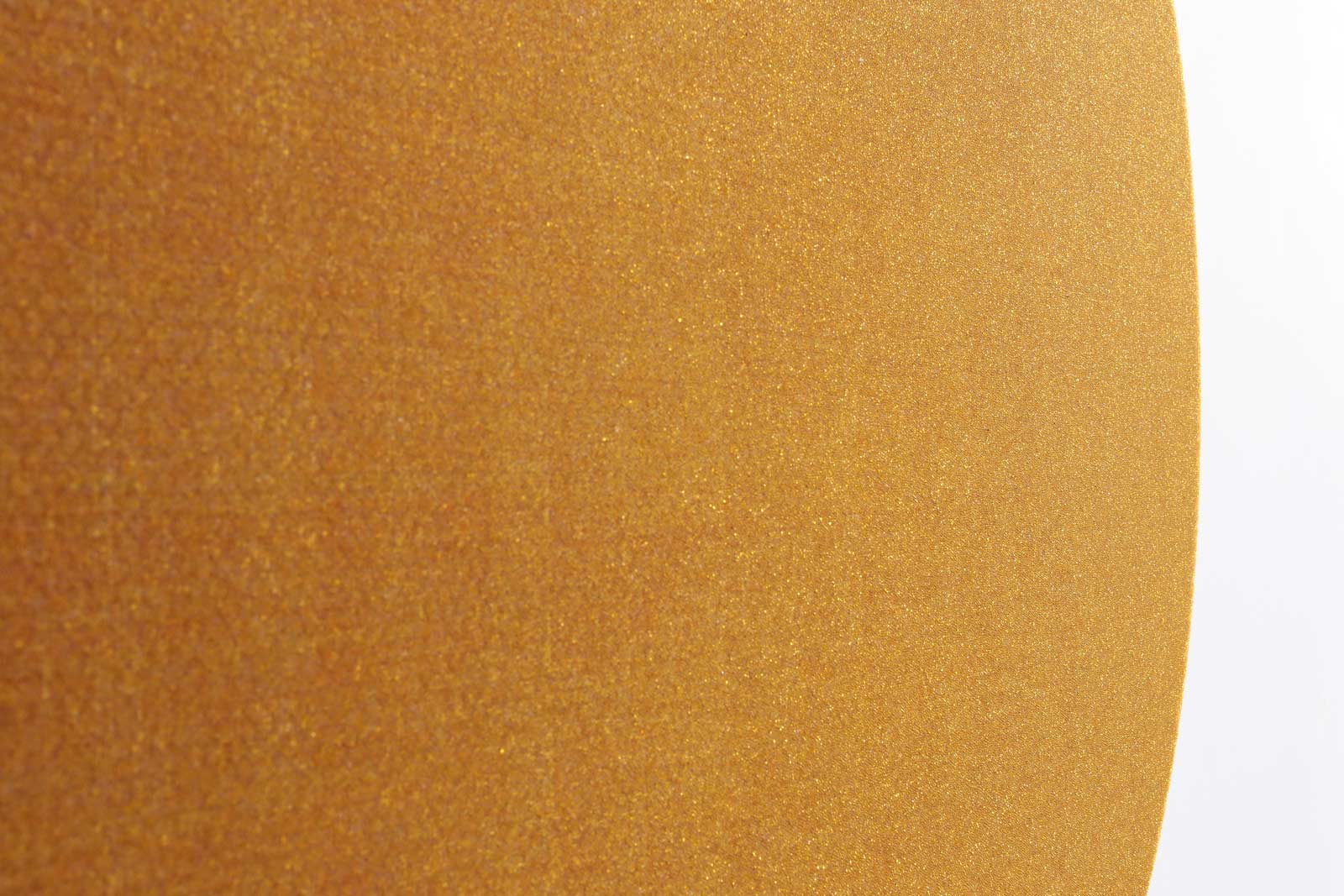 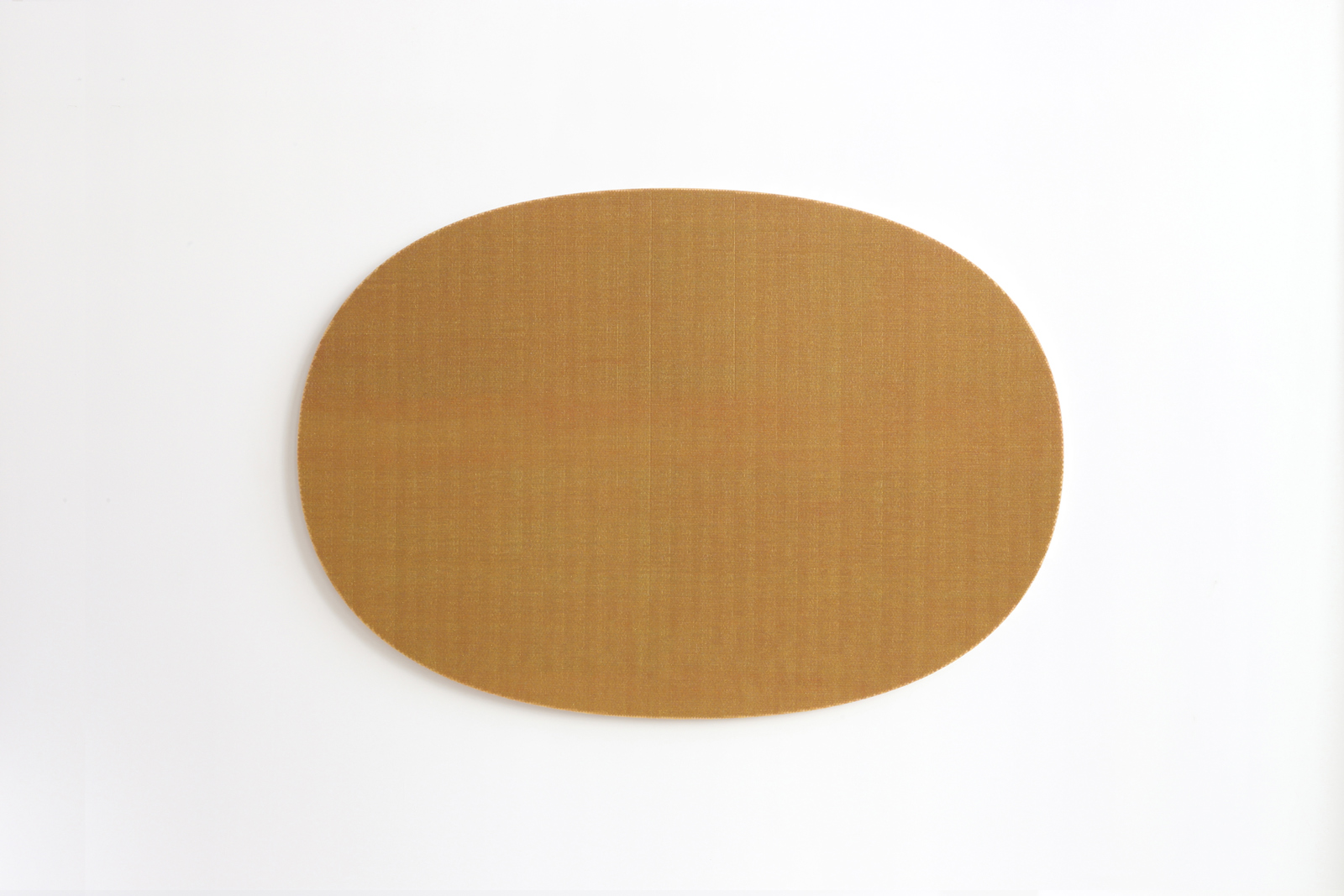 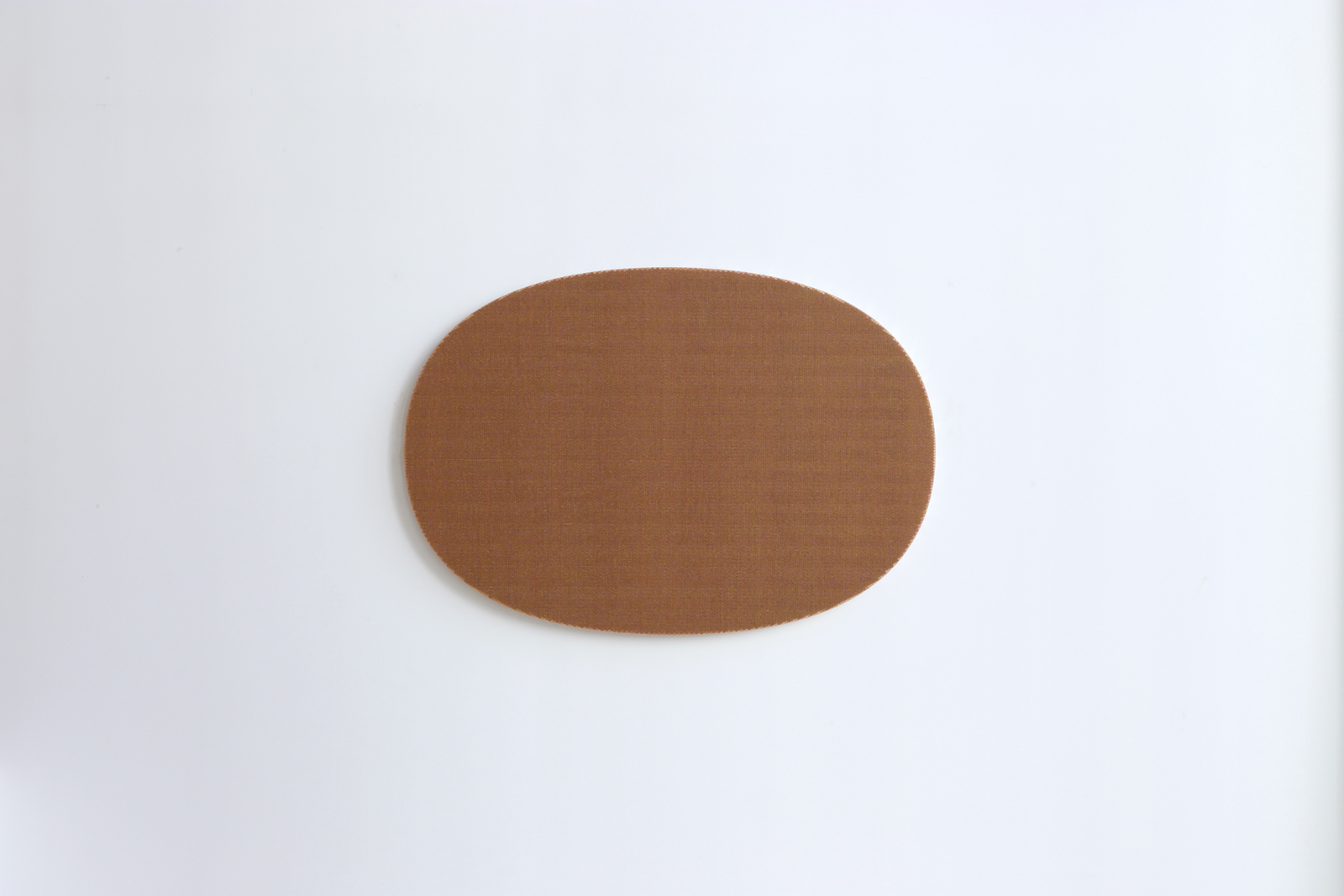 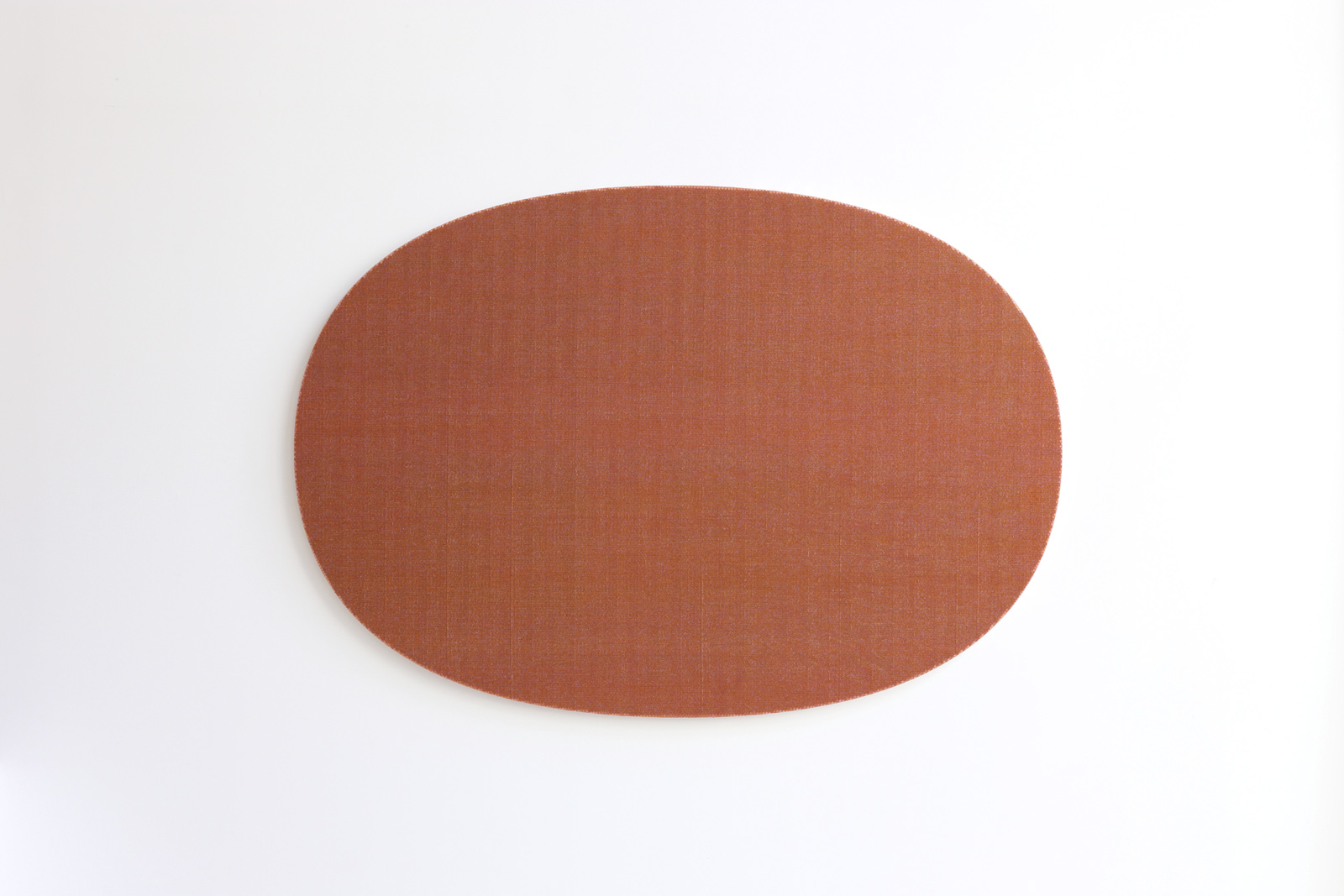 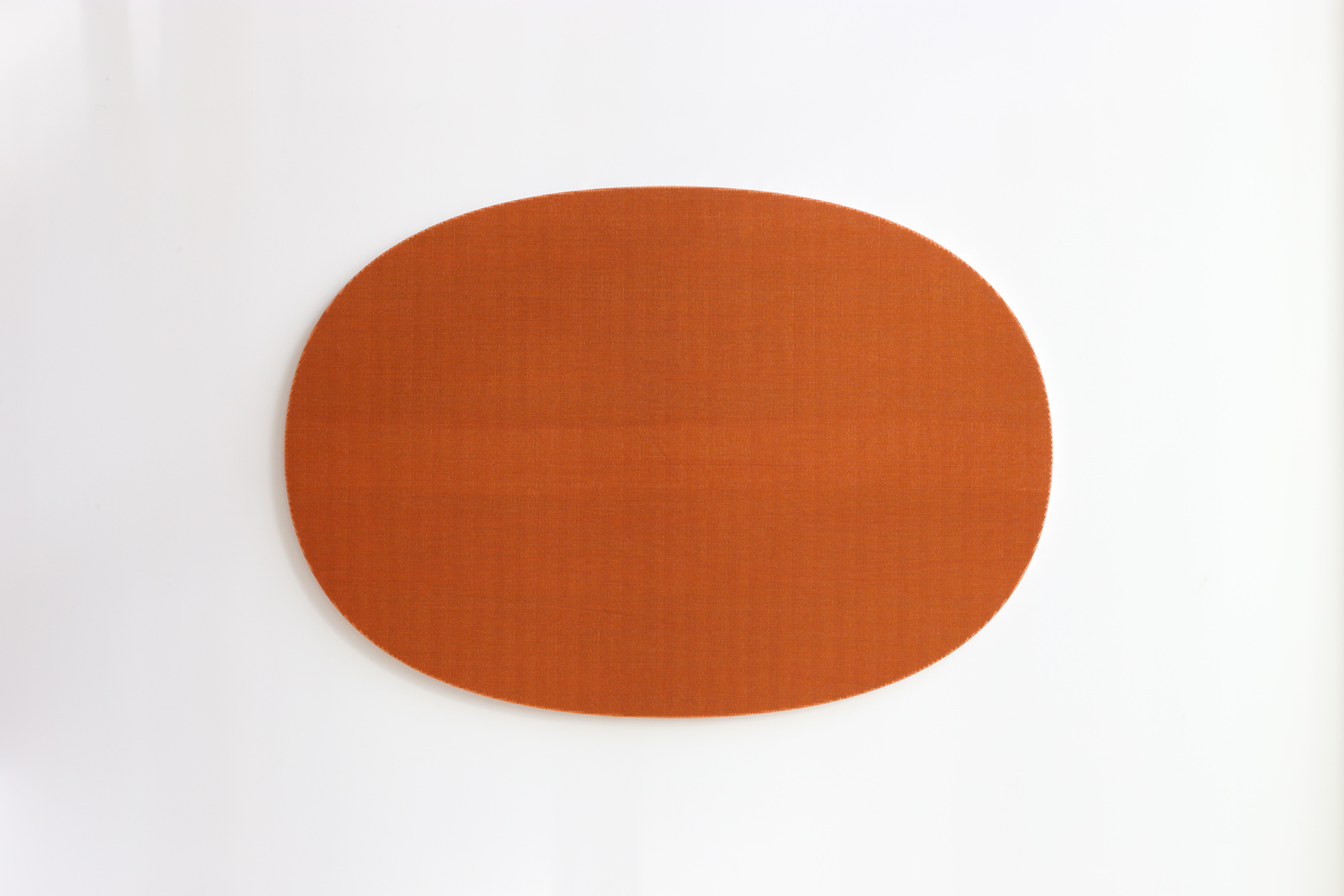 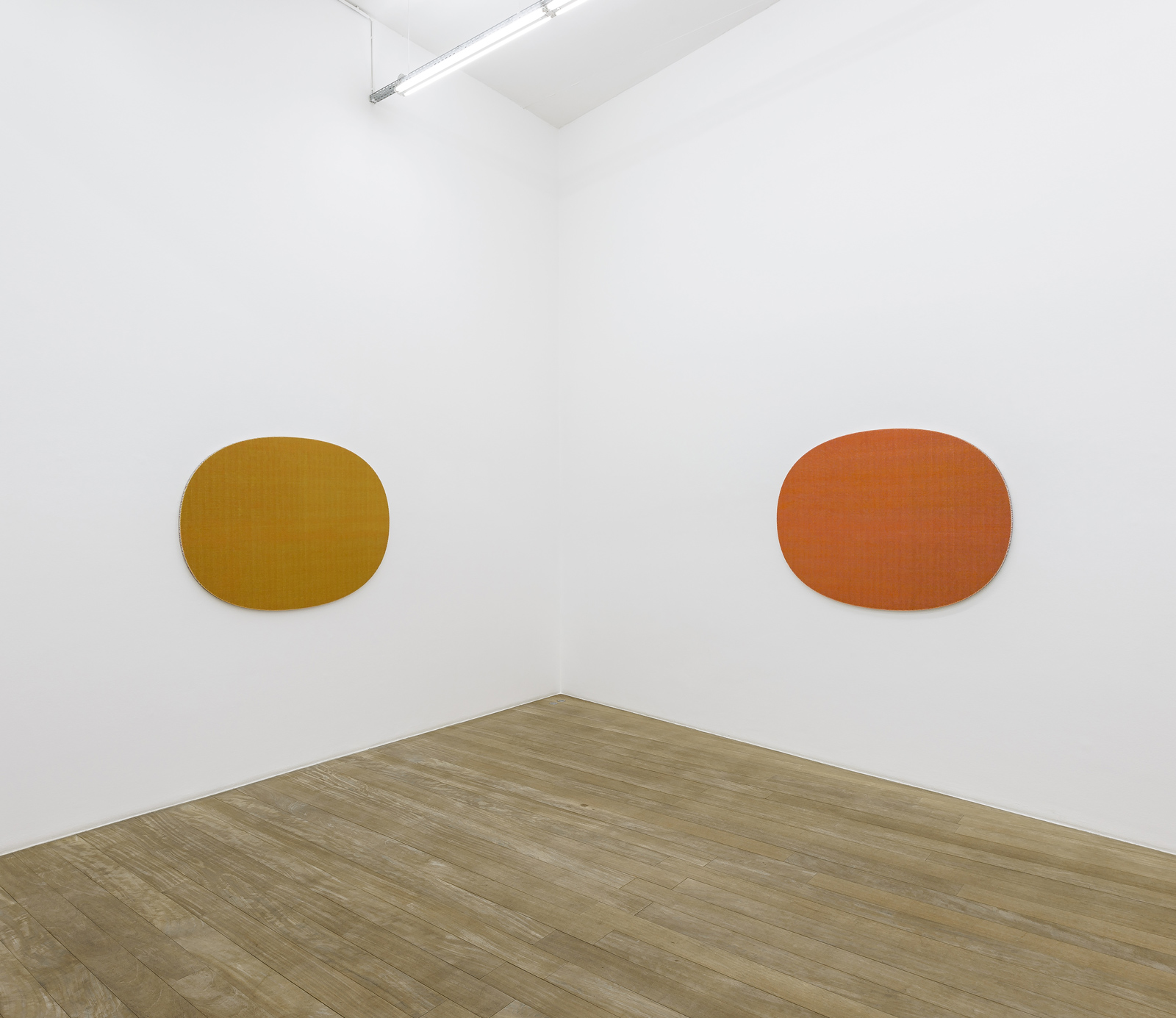